Mullackal Rajarajeswari temple, Alappuzha
The temple is located at the heart of Alleppey town. The presiding deity is Goddess Rajarajeswari. The temple celebrates two festivals every year. 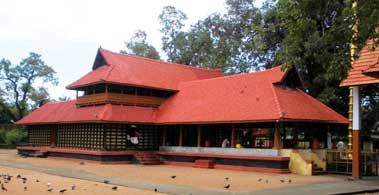 The nine-day 'Navarathri' festival is specially important.The last two days are the most auspicious days. Colourful processions participated by nine elephants are held in the evening. It is witnessed by thousands of devotees. Also several cultural programmes including Ottanthullal are staged in the temple.
Another festival celebrated by the temple is a one day 'Thaipooyakavadi' about fifteen kavadis take part in this spectacular procession which is presented during the evening.

Mannarasala Sree Nagaraja Temple, Haripad
This beautiful temple dedicated to the King of Serpents is located 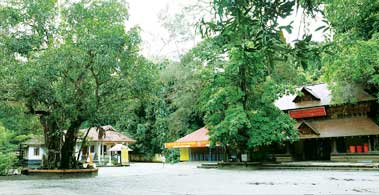 near Haripad on the Alleppey-Quilon route on a panoramic site of thick green forest measuring about 16 acres . It is a place of worship visited by large number of devotees from all over India.

A two day festival is celebrated by the temple with much religious fervour.On the second day by noon, the 'Ezhunnallathu' (royal outing) ceremony is conducted when the idol of 'Nagaraja' is carried by the priests and taken round the temple in a procession. A large crowd of devotees with 'urili' (vessel) and colourful parasols participate in it. The entire jungle setting of the temple reverberates with the full throated chantings in praise of the Serpent God.

Sree Krishna temple , Ambalappuzha
Ambalappuzha is situated 14 km. away from Alleppey. The Sreekrishna temple is one of the most important temples in Kerala. In its architectural 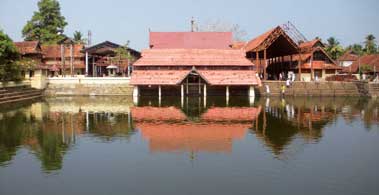 features, the temple conforms to the typical kerala style architecture. The main festival is celebrated during March/April. The temple is famous throughout Kerala for 'Palpayasam' , a milk porridge of exceptional sweetness prepared in a very large quantity and offered to the deity. Poet Kunjan Nambiar who lived in the 16th century staged his first 'Ottam Thullal', a solo dance, in this temple auditorium.

The Latin Catholic Church
It is one of the oldest churches, which has now been renovated and given a face lift. It is situated near Kannan Varkey Bridge, Alappuzha. 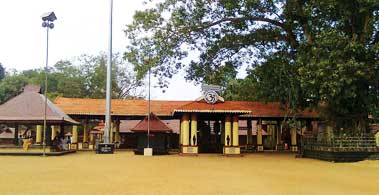 The deity in this temple is Bhadrakali and is supposed to possess miraculous powers. The main festivity associated with the annual festival of the temple, 'Kettukazhcha' is very famous and it is a procession of tall decorated structures in chariots in which effigies of horses, bullocks and epic heroes like the Pandavas and various scenes from the Puranas are displayed. This festival is celebrated during February/March every year. 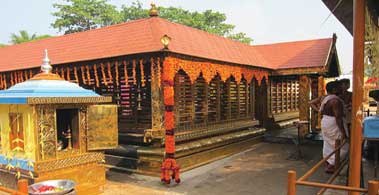 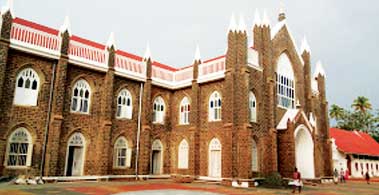 St. Andrew's Forane Church at Arthunkal, one of the sacred churches in Kerala, attracts lakhs of devotees both Christians and non-Christians every year from all parts of the State. The feast of St. Sebastian is celebrated on a grand scale for eleven days in a year. January 20 is the final day of the feast. Arthunkal is 8 Km from Cherthala, 22 Km from Alappuzha and 48 Km from Kochi.