The fisheries in Alappuzha district occupies a very important position in the industrial sector in Kerala state. Its western boundary, the Arabian sea has rich marine resources. More than 20 per cent of the total area of the district is water-logged, and the 20,000 acres of ‘kari’ lands and 42,736 acres of paddy fields in Kuttanad are suitable for pisciculture.

The Fisheries Department has established a fishermen colony of 20 houses at Thevarvattom in Thycattussery panchayat. Feeder roads from the sea coast to main roads have been constructed to help the fishing industry. The department also started two dispensaries at Thottappally and Pallithode. Another one is under construction at Pallana. The department has established an estuarine fish farm at Ayiramthengu, the southern most boundary of the district. Local varieties of fish are reared in this farm and sold to public at reasonable rates. 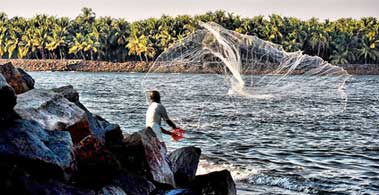 There is a Regional Fisheries Technical High School in Arthunkal. 'Chakara' is a rare marine phenomenon found in this district. It happens usually in the early days of June and may last upto the end of August.