The easy availability of raw materials and existence of backwaters and canals suitable for the wetting of green husk and accessibility of transportation are the main factors for the development of this industry. Arabs had carried on trade in coir products from very ancient times. The manufacture of mats and mattings was first introduced in 1859 by Mr. James Durragh, an American who founded the firm M/s Durragh Smail Ltd., at Alappuzha with offices in London and New York. 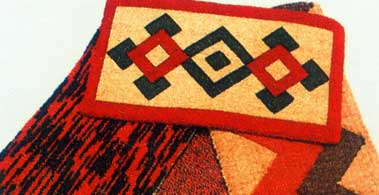 The Coir Board was established by the Central Government under the provisions of the Coir Industry Act, 1955. There is also a Coir Research Institute functioning at Kalavoor. The National Coir Training and Designing Centre was also established at Alappuzha in 1965.

Alappuzha has been considered the Venice of the East and the interior of the district has paved way for its overall development. However, compared to the status attained by Kochi, the development of Alappuzha was considerably retarded. Of late, there is a ray of hope for industrial development in the district with the opening of the new rail link with Ernakulam, the commercial capital of Kerala. Within the next few years, it is hoped that Alappuzha district may regain its importance by offering a favorable climate for industrial expansion.

Coir is the most important commodity manufactured in Alappuzha, Kayamkulam, Kakkothamangalam, Komalapuram, Mannancherry, Muhamma and Cherthala. Lime shell in Arookutty and Kodamthuruthu, Plywood in Chengannur, Keltron controls in Aroor, Potassium Chloride in Mavelikkara and coconut in Thanneermukkom are also worth mentioning and figure in the industrial map of Alappuzha. The other important commodities manufactured in these towns are copra, coconut oil, glass, mats, marine food and matches.

From time immemorial, Alappuzha was known as an important trading and commercial centre. Arabs had carried on trade in coir products and pepper from very ancient times. Coir yarn and fibre are the chief commodities exported from this district. Alappuzha is also an important exporting centre of coconut oil, arecanut, cardamom, sugar and pepper.

The major commodities handled at Alappuzha market are coir, ginger, oil cakes, palmgur, tapioca, etc. Trade is generally carried through inland waterways and by road. Rail movement of goods is done mainly through Chengannur, Mavelikkara and Kayamkulam railway stations and through the stations lying on the Ernakulam - Alleppey rail route. There are several public markets all over the district of which the market at Kayamkulam is the most popular.

The Travancore Chamber of Commerce was established in 1929 at Alappuzha for the promotion and protection of trade, commerce, agriculture and industry. There are several registered associations of manufacturers and merchants in Alappuzha. There are many commercial banks and co-operative societies for financing the traders and industrialists. At present Alappuzha is an important wholesale and retail trading centre for rice, copra, coconut oil, pepper, ginger and arecanut.